According to the lawsuit, PLN, a project of the Human Rights Defense Center (HRDC), “engages in core protected speech and expressive conduct on matters of public concern, such as the opera-tion of prison facilities, prison conditions, prisoner health and safety, and prisoners’ rights.” PLN also distributes a selection of books of interest to prisoners, including self-help legal books.

Since September 2013, PLN has mailed at least 336 issues of its monthly publication to prisoners at the Bob Wiley Detention Facility that were censored by jail officials; sometimes the issues were sent back marked “Return to Sender” with no explanation provided. PLN was not afforded an opportunity to appeal the jail’s censorship decisions.

Several prisoners indicated that PLN’s publication was being rejected because it is bound with small metal staples. However, PLN noted in its complaint that the facility has “allowed other publications containing staples to be delivered to prisoners,” specifically citing evidence of delivery of a Christian publication that is also bound with staples.

“Defendants’ refusal to deliver Prison Legal News, a secular publication, because it is bound with staples, while delivering a Christian publication bound with staples to inmates in the Jail, violates the Establishment Clause of the First Amendment of the United States Constitution,” the complaint states. The lawsuit also notes that jail staff already provide prisoners with staples in several other ways at the jail.

“Corrections officials cannot censor publications sent to prisoners on the grounds that they are bound with staples, a spurious rationale that has been unsuccessfully asserted as a defense in other lawsuits challenging similar mail policies,” said PLN editor Paul Wright. “Nor can they use the existence of flimsy staples in the binding as a pretext to justify censorship of PLN’s secular political speech while simultaneously allowing other publications which contain staples into the jail and giving staples to prisoners in other ways.”

“Prison officials do not have the right to censor publications simply because they dislike the publisher,” added Lisa Ells, lead counsel in PLN’s suit against Tulare County. “The actions of jail officials are not only unconstitutional, but they make it more difficult for prisoners to receive information that can assist them in making a successful transition to society after their release.”

The lawsuit seeks injunctive relief, declaratory relief and damages against the defendants, as well as attorney fees and costs. 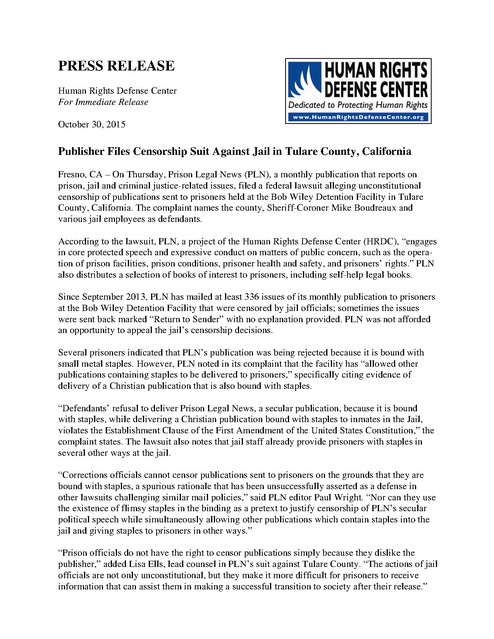