Over 1.5 million families with loved ones in state and federal prisons will experience significant financial relief with respect to the fees charged for Inmate Calling Services (ICS) beginning March 17, 2016, despite the best efforts of major ICS providers, including Global Tel*Link, Securus and Telmate. The Federal Communications Commission (FCC) voted on October 22, 2015 to enact reforms to protect families that rely on phone calls to stay in touch during times of incarceration. ICS providers wasted no time in appealing to the U.S. Court of Appeals for the District of Columbia Circuit in an attempt to invalidate the FCC’s ruling, so they can continue to prey on prisoners’ families – a captive market – through inflated phone rates and exorbitant fees.

The State of Oklahoma, Oklahoma County Sheriff John Whetsel and the Oklahoma Sheriffs’ Association sought to intervene in the ICS providers’ appeal to ensure they would continue to receive lucrative commission kickbacks from revenue generated from prisoners’ phone calls. Eight other states have also tried to intervene in the case: Arizona, Arkansas, Indiana, Kansas, Louisiana, Missouri, Nevada and Wisconsin. While the D.C. Court of Appeals denied Oklahoma leave to file a motion for stay in its ruling on Monday, close attention should be paid to the profound conflict of interest demonstrated by the state Attorneys General who have sought to intervene in the case. Elected to represent the interests of all taxpayers, they are only interested in price gouging some of their poorest citizens in exchange for kickbacks from ICS providers. The efforts of states to intervene in this case against the interests of consumers serves to underscore the need for regulatory action by the FCC, as very few elected officials are willing or able to stop the financial exploitation of prisoners’ families, and at least nine states have indicated they are willing to spend taxpayer dollars to ensure that such exploitation continues.

Historically, the cost of prison phone calls has been extremely high – more than $1.00 per minute in many cases. Under the leadership of Commissioner Mignon Clyburn as Acting Chair, the FCC took the first step in reforming the prison phone industry with a historic vote in August 2013 to cap interstate (long distance) ICS calls with interim rates of $0.25/min. for collect calls and $0.21/min. for debit and prepaid calls. The interim rate caps went into effect February 11, 2014. In its October 2015 order, the FCC issued lower rate caps scheduled to go into effect on March 17, including caps of $.11/min. for debit and prepaid calls made from state and federal prisons. Caps on calls from local jails were set to go into effect several months later.

However, in its ruling issued Monday, the D.C. Court of Appeals stayed implementation of the lower rate caps – though the FCC’s limits and bans on ancillary fees charged in addition to the per-minute phone rates will go into effect as scheduled. This will provide substantial financial relief to prisoners’ families, as ancillary fees can represent up to 40% of the cost of a call. In accordance with the FCC’s order, ICS providers can charge only three ancillary fees: up to $3.00 for automated payments by phone or online, $5.95 for payments through a live agent and $2.00 to receive a paper bill. The FCC also banned flat-rate calling, which the Court did not disturb.

Further, the Court’s stay means that the FCC’s prior interim rates of $0.21/min. for debit and prepaid calls, and $0.25/min. for collect calls, will remain in effect. Prisoners’ families will also benefit from the elimination of connection fees and minimum balance requirements, in addition to a regulatory requirement that all ICS providers must disclose their phone rates to the public. Additional reforms ordered by the FCC target phone services for the deaf and hard of hearing, including rates charged for prison and jail calls made through TTY devices.

“While it is disappointing that the Court’s initial ruling did not allow the FCC’s lower rate caps to go into effect as scheduled, we are confident that victory will be achieved despite the legal challenge filed by hedge fund-owned ICS providers to delay drastic cuts to their obscene profit margins,” said Paul Wright, Executive Director of the Human Rights Defense Center. “There should be no mistake that the provisions of the FCC’s order that will go into effect in state and federal prisons next week, and later in jails nationwide, represent a significant step forward for millions of families, which will see immediate financial benefits,” he added.

HRDC is a co-founder and coordinator of the national Campaign for Prison Phone Justice (www.phonejustice.org), in addition to MAG-Net, a project of the Center for Media Justice, and Working Narratives. 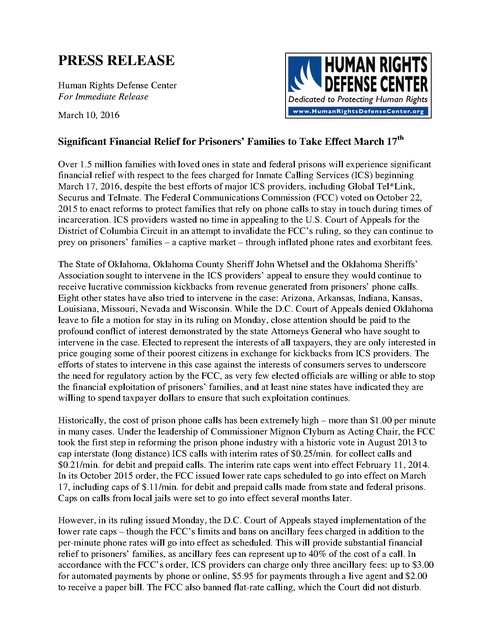