the Inspector General (OIG) report that found the company’s facilities housing federal prisoners had higher rates of assaults, use of force allegations, lockdowns, positive drug test results and contraband in comparison with other privately-operated federal prisons.

The Human Rights Defense Center, founded in 1990 and based in Lake Worth, Florida, is a non-profit organization dedicated to protecting human rights in U.S. detention facilities.

Following the OIG report, the U.S. Department of Justice announced plans to phase out the federal government’s use of for-profit prisons. On August 18, 2016, then-Deputy Attorney General Sally Q. Yates wrote in a memo that private prisons “simply do not provide the same level of correctional services, programs, and resources; they do not save substantially on costs; and ... they do not maintain the same level of safety and security.”

The call for independent audits of GEO Group facilities was included in a shareholder resolution filed by Human Rights Defense Center associate director Alex Friedmann in November 2016. Friedmann owns a small amount of GEO Group stock as an activist investor, which allows him to attend the company’s annual shareholder meetings and file resolutions designed to improve the company’s operations. But on February 2, the Securities and Exchange Commission granted the GEO Group’s request to reject the resolution seeking independent audits.

“It’s clear from the OIG report that GEO Group isn’t properly protecting the rights of the men and women in the company’s custody. Being in prison doesn’t mean living in fear of assaults by other prisoners, or being subject to unsafe conditions of confinement. These unacceptable third-world conditions are taking place in our backyards and GEO Group refuses to allow independent audits of its for-profit facilities to identify and remedy these problems. It’s an outrage. What do they have to hide?” said Human Rights Defense Center executive director Paul Wright.

The resolution called for all GEO Group facilities to undergo independent third-party audits beginning in 2018. “Such audits shall examine operational benchmarks at the Company’s correctional and detention facilities that include, but are not limited to, those examined in the August 2016 OIG report – including rates of violence and use of force incidents, disciplinary and grievance systems, contraband, lockdowns and positive drug tests.”

The audit results would be made available to company shareholders. Since the OIG report was released last August, GEO Group has faced multiple shareholder lawsuits.

In its objection filed with the SEC, GEO Group argued that the resolution should be excluded because it concerned the company’s “ordinary business operations,” claiming that it intruded upon issues “fundamental to management’s ability to run a company on a day-to-day basis” – even though GEO currently does not require its facilities to undergo independent audits.

“Considering that operational deficiencies at GEO Group-run federal prisons led to a negative report by the Office of the Inspector General, one would think the company should embrace independent audits of its facilities to improve operations. That would benefit not only GEO’s contracting government partners but also prisoners and prison staff, as well as shareholders,” said Friedmann. “But apparently, GEO Group doesn’t care about such outcomes.” 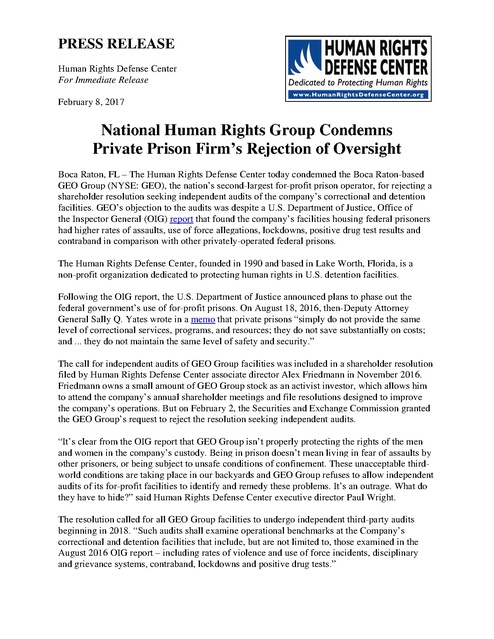