While employed as a partner in the law firm Jenner & Block, LLP, Mr. Pai represented Securus Technologies. Securus is one of the largest providers of prison phone services; the company enjoys monopoly contracts at more than 3,400 prisons in 48 states. Regulating the rates Securus can charge prisoners and their families falls within the FCC’s jurisdiction, but Mr. Pai not only represented the interests of Securus Technologies before joining the FCC, he has continued to work on behalf of the firm’s interests, HRDC argues.

In 2011, during Mr. Pai’s confirmation process as one of the five FCC commissioners, he represented in paperwork that Securus was, in fact, his client. But more recently in his 2017 paperwork submitted as part of the confirmation for FCC Chairman, he distanced himself from Securus, claiming the company was just one of the law firm’s clients. HRDC is requesting that Mr. Pai clarify his connection with Securus and disclose any financial relationship.

Noting additional improprieties on the part of Mr. Pai, HRDC cites a letter issued by the FCC just one week after President Trump appointed Mr. Pai as FCC Chairman. Over the past four years, the FCC has issued several orders capping the rates companies such as Securus can charge for phone calls made by prisoners. Before such restrictions, Securus and similar companies were charging obscene rates for families to be able to talk with imprisoned loved ones, reaching over $1.00 per minute. This created an enormous hardship on prisoners’ family members.

Securus, along with other prison phone providers and corrections officials, challenged the FCC’s prison phone reforms in court. Under prior leadership, the FCC fought to uphold its orders. Yet only eight days after Pai’s appointment by President Trump as FCC Chairman, the agency sent a letter to the court hearing the case, announcing the FCC would no longer defend its rate caps for intrastate prison phone rates. The agency effectively “threw in the towel” and gave up fighting Securus’ efforts to eliminate restrictions on what it can charge for prison phone calls.

Mr. Pai then issued a statement praising the court for its decision, writing, “...the D.C. Circuit agreed with my position that the FCC exceeded its authority when it attempted to impose rate caps....” Yet, as HRDC noted, Mr. Pai failed to mention that the court’s ruling resulted after the FCC refused to defend its intrastate rate caps, hamstringing the agency’s attorneys.

Further, while serving as an FCC Commissioner, Mr. Pai has voted against every effort to limit prison phone rates charged by companies such as Securus Technologies, his former client.

“To uphold the high ethical standards to which the American public and taxpayers are entitled, and to avoid even the appearance of this obvious conflict of interest, HRDC respectfully requests that Mr. Pai recuse himself from all actions and decisions involving both Securus Technologies and the ICS [Inmate Calling Services] industry. Further, we call on Mr. Pai to disclose any financial relationships he has with Securus or any other ICS providers, or companies that own ICS providers,” wrote HRDC executive director Paul Wright.

HRDC’s letter to the FCC is posted here.

The Human Rights Defense Center is a Florida-based non-profit organization that works to protect the rights of people held in U.S. detention facilities. HRDC co-founded the Campaign for Prison Phone Justice in 2011. 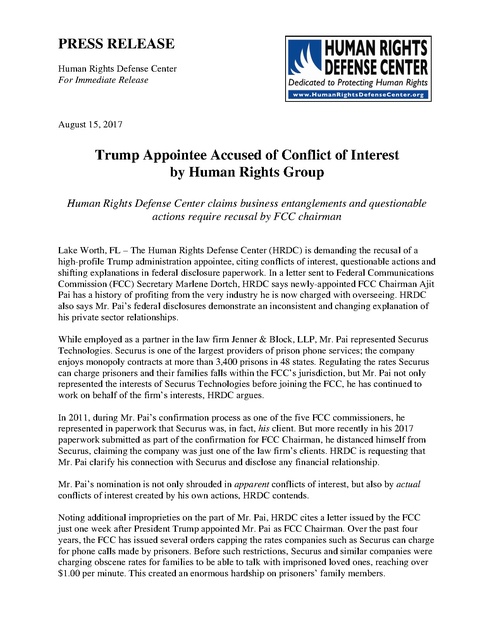