Washington, DC – Declaring it a potential major step forward in the protection of prisoners’ rights, the Human Rights Defense Center today announced its support for the Dignity for Incarcerated Women Act (S. 1524).

The Act, introduced on July 11 by Senators Cory A. Booker (D-NJ) and Elizabeth Warren (D-MA), joined by Senators Richard Durbin (D-IL) and Kamala Harris (D-CA), would extend several important protections to federal prisoners – particularly women. The female prisoner population in the United States has exploded by over 700 percent since 1980, and today is a larger portion of the overall prison population than ever before.

Women are often the primary caregivers in families, and their incarceration places additional burdens and stress on their children. The Act would prohibit the federal Bureau of Prisons (BOP) from charging for telephone calls made by prisoners. Presently, female prisoners are sometimes forced to choose between using their limited funds to either call family members or purchase hygiene items such as sanitary napkins or tampons while they are menstruating.

“As the co-founder of the national Campaign for Prison Phone Justice (www.phonejustice.org), the Human Rights Defense Center has worked with the Federal Communications Commission to regulate the prison telecom industry which has, for far too long, been allowed to price gouge prisoners and their families for simply wanting to stay in touch. The Act would require the Bureau of Prisons to provide phone calls at no cost to federal prisoners, thereby reducing the significant financial burden on their family members,” said Paul Wright, executive director of the Human Rights Defense Center.

In addition, the Act would require video calling be made available at all BOP facilities free of charge, and would prohibit prison officials from using video calling as a substitute for in-person visitation. Video calling is especially important in federal prisons, where prisoners may be housed hundreds or even thousands of miles from their families, and thus rarely receive in-person visits with their children. The Act would require prison officials to take into consideration the proximity of prisoners to their children when deciding where prisoners will be incarcerated.

The Human Rights Defense Center also supports other provisions of the Act, including a ban on shackling pregnant prisoners and placing them in solitary confinement; providing parenting classes to prisoners who were the primary caretakers of minor children; ensuring that female prisoners receive feminine hygiene products at no cost, such as tampons and pads; expanding eligibility for substance abuse treatment (the Residential Drug Abuse Program) to prisoners who are pregnant or were the primary caretakers of minor children; and creating an ombudsman’s office to monitor certain conditions and policy requirements in BOP facilities.

HRDC issued a letter in support of the Dignity for Incarcerated Women Act (S. 1524) on March 29, 2017, before the bill was introduced, after reviewing an advance copy of the legislation. That letter, addressed to Senator Booker, is posted here.

HRDC executive director Wright noted that, importantly, many provisions of the bill would apply to male prisoners, too – many of whom also have minor children. It is estimated that 2.7 million children in the United States have a currently-incarcerated parent.

The Human Rights Defense Center, founded in 1990 and based in Lake Worth, Florida, is a non-profit organization dedicated to protecting human rights in U.S. detention facilities.HRDC publishes Prison Legal News (PLN), a monthly magazine that includes reports, reviews and analysis of court rulings and news related to prisoners’ rights and criminal justice issues. PLN has thousands of subscribers nationwide and operates a website (www.prisonlegalnews.org) that includes a comprehensive database of prison and jail-related articles, news reports, court rulings, verdicts, settlements and related documents. 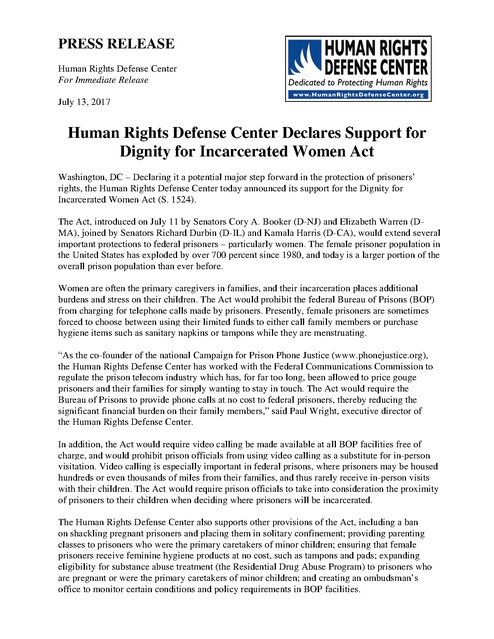