Lake Worth, FL – A Freedom of Information fight that began two years after 9/11 has ended with the federal government turning over more than 11,000 documents and paying out almost a half-million dollars to Prison Legal News, a monthly publication that reports on criminal justice-related issues and a project of the Human Rights Defense Center (HRDC).

In August 2003, Prison Legal News (PLN), concerned about a lack of government transparency tracking sexual assaults and other crimes committed against prisoners in federal Bureau of Prisons (BOP) facilities, requested seven years-worth of documents showing how much money the BOP had paid out in lawsuits and claims. PLN filed a Freedom of Information Act request seeking “all documents showing all money paid by the Bureau of Prisons ... for lawsuits and claims” filed against the BOP from January 1, 1996 to July 31, 2003. Such records related to both litigation brought by prisoners as well as by BOP employees.

In its initial response to PLN’s FOIA request the BOP released over 11,000 documents. However, those documents were so heavily redacted that they covered up any useful information as to the BOP’s response to litigation and claims.

Prison Legal News refused to give up and prevailed in federal court in 2009 when a judge held the BOP had improperly redacted and withheld documents. The BOP was forced to turn over additional records, but continued to fight PLN in court. PLN filed five summary judgment motions in the case, in addition to a successful appeal to the D.C. Circuit Court of Appeals in PLN’s favor.

Earlier this month, after the BOP was forced to release additional records to Prison Legal News, the case ended with the federal government reimbursing PLN for $420,000 in legal expenses that were incurred during the fourteen-year legal fight.

“This case isn’t about documents. It’s about the story those documents tell,” said HRDC executive director Paul Wright. “We know that prisoners are being assaulted and raped while behind bars, and that prison employees are filing claims for discrimination, sexual harassment and wrongful termination, but due to the secrecy of the Bureau of Prisons we don’t know the scope of such problems. This lack of transparency and accountability cannot be allowed to continue, as the public has a right to know what happens in our nation’s federal prisons.”

As part of the settlement in the case, the BOP refused to admit that it had improperly withheld documents or information. But Wright said the fact that it took fourteen years to settle the case speaks volumes about government transparency.

“How many more prisoners have been victimized during the fourteen years we’ve been fighting for this information?” he asked. “How much more in taxpayer funds has the BOP paid out in lawsuits and claims filed by prisoners and the agency’s own employees? The Bureau of Prisons must be held accountable for the abuses taking place behind prison walls, and the Human Rights Defense Center will continue to fight to increase both transparency and accountability in the federal prison system.”

Wright also thanked the attorneys who had worked for many years on the case, including sole practitioner Ed Elder, Mara Verheyden-Hilliard and Carl Messineo with the Partnership for Civil Justice, and Ronald London and Ashley Vulin with the law firm of Davis Wright Tremaine. He also extended thanks to PLN’s staff attorneys from 2009 to 2017 who participated in the case, including Dan Manville, Adam Cook, Lance Weber, Alissa Hull, Sabarish Neelakanta, Robert Jack, Monique Roberts and Masimba Mutamba. PLN paralegals Mel Motel, Sam Rutherford, Zach Phillips and Rachel Stevens also assisted during the litigation. 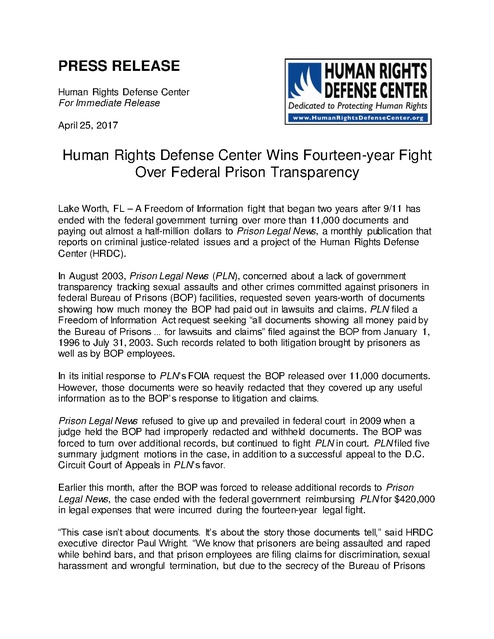