Tallahassee, FL – On August 1, 2018, the Lake Worth-based Human Rights Defense Center (HRDC) filed a wrongful death lawsuit in federal court on behalf of the mother of an African American Florida state prisoner who died of starvation and inadequate medical and mental health care in December 2015.

West Palm Beach resident Vincent Gaines was serving a five-year prison term for burglary of a dwelling. When he was sentenced in June 2013, the court recommended that he be placed in a mental health program; Vincent had previously been hospitalized twice for mental health care, and was diagnosed with bipolar disorder and mania with psychotic features.

He was transferred to the Florida Department of Correction’s (FDOC) Transitional Care Unit at the Dade Correctional Institution in March 2014, due to auditory hallucinations and delusions. As part of his treatment plan, Vincent was placed on a “boneless diet” served without utensils. In November of that year, his weight was recorded at 151 pounds – a drop of almost 40 pounds within the previous 18 months.

Following a disciplinary report in April 2015 for trying to enter the facility’s food service area without permission, Vincent was transferred to the Florida State Prison in Raiford, then to the Union Correctional Institution, where he was placed in Close Management status, aka solitary confinement.

In September 2015, medical staff reported that Vincent no longer exhibited psychosis and had “achieved a level of stability.” While held in FDOC custody, his prescription for psychotropic medication had been discontinued. On December 1, a Corizon social worker intern wrote that Vincent was “alert, calm and cooperative and his speech was appropriate.”

Two days later he was found unresponsive in his cell and pronounced dead.

According to the Medical Examiner, at the time of his death Vincent was 5’9” and weighed just 115 pounds. While the cause of death was “undetermined,” the Medical Examiner noted that he was malnourished and had a “generalized unwashed appearance and probable feces on [the] soles of [his] feet.” During his two-and-a-half years in FDOC custody, while under Corizon’s medical and mental health care, Vincent lost 75 pounds – around 40 percent of his body weight.

To add insult to injury, the FDOC did not timely inform Vincent’s family of his death, and thus he was buried on state prison property without his family’s consent or knowledge. He died in a prison cage, alone, and was buried alone by the system that killed him.

The wrongful death suit was brought by Vincent’s mother, Lorine Gaines, and raises claims under the Americans with Disabilities Act and the Eighth and Fourteenth Amendments to the U.S. Constitution. It claims the defendants had knowledge of Vincent’s mental illness and weight loss, but failed to provide him with “necessary and adequate mental health and medical care and treatment, including prescribed treatment, thus endangering his health and life.”

The complaint accuses Secretary Jones of being aware of “a history of widespread and long-standing abuse and deliberately indifferent treatment by her employees and agents, including that of Corizon, during the latter’s tenure as FDOC’s mental health and medical services provider.”

It also states that Corizon “was responsible for ensuring that prisoners were not denied mental health and medical treatment and received such treatment in a timely and adequate manner,” and “was also responsible for the employment, qualifications, training, supervision, and conduct of its employees and agents. Additionally, Corizon’s employees and agents directly oversaw Mr. Gaines’ initial mental health and medical intake following his sentencing and remand into the custody of FDOC, as well as his subsequent treatment and his treatment classifications between various FDOC facilities and within the housing units of each FDOC facility.”

In support of its request for punitive damages, the suit argues that “the conduct of all of the Defendants was of a gross and flagrant character, suggestive of a reckless disregard of human life or safety, and/or a complete lack of care suggesting indifference to consequences.”

“It is an outrage that in the 21st century American prisoners are being starved to death in barbaric conditions by a prison system whose employees enjoy total impunity for their criminal actions. We hope the civil justice system will help provide the deterrence that is otherwise sadly lacking within Florida’s prison system,” said HRDC executive director Paul Wright.

A copy of the complaint is posted here. 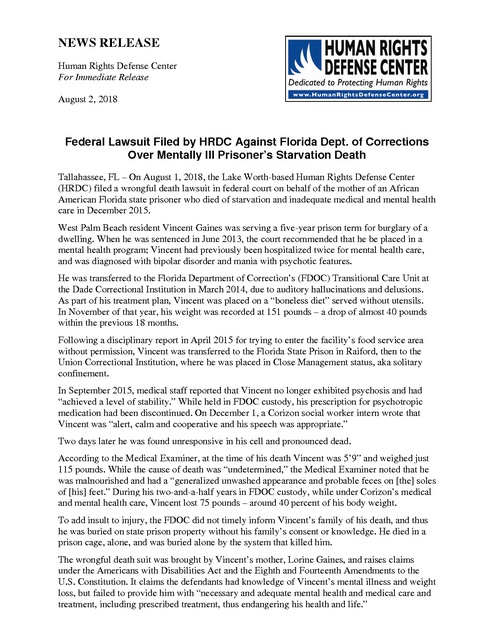