The Cost of Prison Censorship: Florida Taxpayers to Pay $1.2 Million

Tallahassee, FL – On October 22, a federal district court in Tallahassee awarded almost $1.2 million in attorneys’ fees and costs in a censorship lawsuit against the Florida Department of Corrections (DOC).

The lawsuit was filed in 2011 by Prison Legal News (PLN), a 72-page monthly publication that covers criminal justice-related issues; PLN is a project of the non-profit, Lake Worth Beach-based Human Rights Defense Center. The suit followed years of censorship by the DOC, which rejected all issues of PLN, purportedly due to an incidental number of advertisements for prison phone services, penpals and companies that purchase postage stamps from prisoners.

PLN, which has published for almost 30 years, is not censored on the basis of its advertisements in the 49 other state prison systems, nor in the federal Bureau of Prisons, including maximum-security facilities. PLN raised a First Amendment censorship claim and a due process claim for the DOC’s failure to provide adequate notice when publications were rejected by prison staff.

Following a bench trial, in October 2015 the district court held the DOC’s censorship practices did not violate the First Amendment, but that prison officials had violated PLN’s due process rights. The court issued a permanent injunction on the latter claim.

PLN appealed to the Eleventh Circuit, which affirmed the district court’s ruling on May 17, 2018. A certiorari petition to the U.S. Supreme Court followed, with support from over 100 amici partners, including briefs filed by former prison officials, law professors, media agencies, prison book programs, advertisers, faith-based groups, conservative organizations such as the Cato Institute and Americans for Prosperity, and civil rights advocates. PLN was represented before the Eleventh Circuit and the Supreme Court by former U.S. Solicitor General Paul D. Clement with Kirkland & Ellis LLP, and by former White House associate counsel Michael H. McGinley with Dechert LLP. The Supreme Court declined to review the case, resulting in remand to the district court and the entry of the attorneys’ fee order this week.

In his 36-page order, U.S. District Court Judge Mark E. Walker awarded $1,148,210.89 in fees plus $33,448.57 in litigation expenses to PLN as the prevailing party in the case, as it had succeeded on its due process claim. The court had previously awarded $6,204.42 in costs, for a total award of $1,187,863.88. PLN’s attorneys expended over 4,064 hours in litigating the suit, both before the district court and on appeal, and the district court rejected most of the defendants’ objections to the fee award. PLN’s fee expert was William K. Hill with the Gunster law firm.

“Free speech isn’t free,” said Human Rights Defense Center executive director Paul Wright. “In this case, censorship by the Florida Department of Corrections cost state taxpayers almost $1.2 million – because of the vicious efforts by the prison system to censor HRDC’s publications. The Attorney General’s office spent over 3,000 hours in attorney time fighting this case. The real tragedy is that Florida prisoners remain unable to read PLN and other HRDC publications that will educate and inform them of their rights.”

PLN was represented in the litigation at the trial level by Dante Trevisani and the late Randy Berg with the Florida Justice Institute; by the ACLU Foundation of Florida; and by former HRDC general counsel Sabarish Neelakanta, current general counsel Dan Marshall and staff attorney Masimba Mutamba. The case is Prison Legal News v. Inch,U.S.D.C. (N.D. FL), Case No. 4:12-cv-00239-MW/CAS.

The Human Rights Defense Center, founded in 1990 and based in Lake Worth Beach, Florida, is a non-profit organization dedicated to protecting human rights in U.S. detention facilities. In addition to advocating on behalf of prisoners and publishing books and magazines related to the criminal justice system, HRDC engages in state and federal litigation on prisoners’ rights issues, including wrongful death, public records, class actions and Section 1983 civil rights cases. 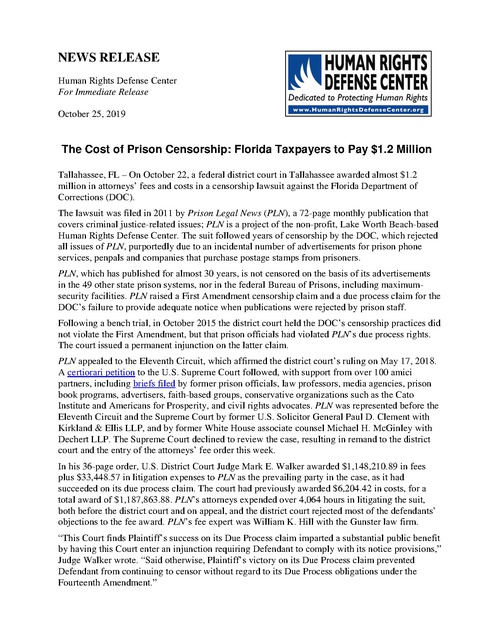