Company claims resolution would infringe on its “ordinary business operations”

Boca Raton, FL – Last month, a shareholder resolution was filed with GEO Group, one of the nation’s largest for-profit prison companies (NYSE: GEO), that would prohibit the firm from housing immigrant detainee children or parents who have been separated from each other by U.S. government officials.

GEO operates a number of immigration detention centers under contract with Immigration and Customs Enforcement (ICE), part of the U.S. Department of Homeland Security. While the company has denied that it houses children separated from their parents, the resolution noted it “may change that policy in the future or may enter into future contracts to house separated immigrant children and/or parents.”

According to news reports, immigrant families are still being separated at the U.S.-Mexico border and the Trump administration is “actively considering“ plans to renew separation efforts.

In a January 7 letter submitted to the Securities and Exchange Commission (SEC), GEO Group objected to the resolution and sought a “no action” ruling to exclude it from a shareholder vote.

In its letter, GEO argued the resolution should be excluded because it involves matters related to the company’s “ordinary business operations,” adding, “The Proposal relates to several fundamental aspects of the Company’s business and management decisions, specifically: (i) the services the Company provides pursuant to its facility contracts relating to immigration detention centers; (ii) its relationship with ICE, the governmental entity that is a party to the contracts with GEO with respect to the immigration detention centers the Company operates; and (iii) the Company’s role in advocating or not advocating for or against a specific immigrant detention policy. These aspects of the Proposal are ‘fundamental to management’s ability to run a company on a day-to-day basis....’”

The resolution was introduced by Alex Friedmann, associate director of the non-profit Human Rights Defense Center and a former prisoner who served time in a private prison in the 1990s, who owns a small amount of GEO Group stock as an activist shareholder.

“If GEO has no intention of housing children or parents who have been separated due to U.S. immigration policy, then it would have no reason to object to this resolution,” Friedmann said. “By doing so, they have clearly indicated that they may in fact house immigrant children and parents who have been separated – for profit, of course, since that is their business model. Apparently, that’s what they mean when they cite their ‘ordinary business operations.’”

The shareholder resolution’s supporting statement notes the company has had “a controversial history with respect to housing immigrant detainees,” explaining: “Of the five immigrant detention facilities with the highest number of sexual abuse complaints, three are operated by GEO Group. Immigrant detainees have staged hunger strikes at GEO Group detention centers.

Of the 18 detainee deaths in ICE custody in FY 2016 and 2017, nine occurred at GEO-run facilities. The Company is currently facing lawsuits for using immigrant detainees to perform work for wages as low as $1.00 per day.”

GEO also complained in its letter to the SEC that the resolution is vague with respect to a statement that such adverse incidents at the company’s detention facilities “pose risks to GEO Group’s reputation and raise liability concerns,” because the terms “reputation” and “liability concerns” were not defined.

“Admittedly,” Friedman noted, “GEO could be forgiven for not being aware of the definition of ‘reputation,’ since they have long lacked having one – or rather a good one, that is.”

“GEO Group should not be profiting from holding immigrant families that have been separated,” Friedmann said when the resolution was filed in December. “They can choose not to do so, even though detaining immigrant women and children has been very profitable for the company. If GEO does not agree with our government’s practice of separating families, this resolution gives them an opportunity to take a stand.”

The company’s objection to the resolution shows where it stands regarding family separation.

The GEO Group shareholder resolution is posted here. The Human Rights Defense Center is currently running a GoFundMe campaign to cover the cost of contacting shareholders about the resolution if it makes it through the SEC’s review process.

Should the resolution be approved by shareholders it would require the company to adopt a policy of not housing separated immigrant detainee parents or children by December 31, 2019, and to modify or cancel any contracts which conflict with that policy when it goes into effect.

For additional information about the GoFundMe campaign, please click here. 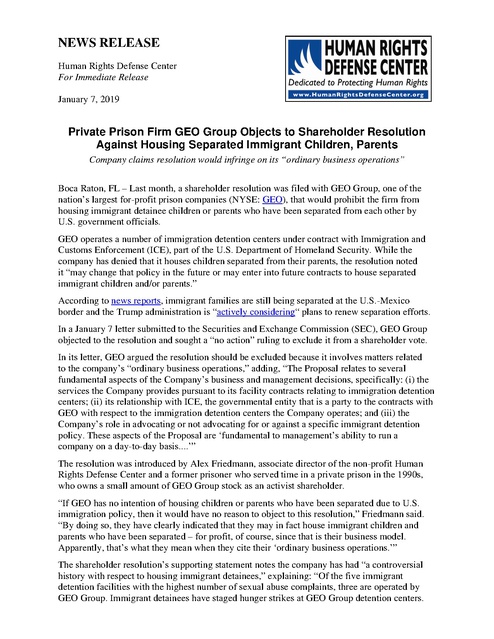