The Human Rights Defense Center is accusing the state Corrections Department and two private prison operators of breaking the law by refusing to provide records regarding lawsuits against the prison management companies.

“They are basically pointing the finger at each other,” center founder Paul Wright said in a phone interview Thursday. “The state says they don’t have them, and the companies are saying they have them but aren’t under any responsibility to disclose them.”

According to two lawsuits filed Tuesday in state District Court, the center asked the companies earlier this year for “all verdicts and settlements related to all claims or lawsuits” brought against MTC in which payments totaled more than $1,000 for the past 10 years, and “all claims or lawsuits” brought against GEO Group “concerning any confinement facility operated in New Mexico” for the same time period.

Both companies said they weren’t subject to the state Inspection of Public Records Act, according to the lawsuits, and the Corrections Department said the records were in the possession of the private contractors.

Wright said Thursday the lawsuits and their outcomes are important because they shed light on conditions inside New Mexico prisons, where 25 percent to 30 percent of state inmates are housed in facilities run by for-profit companies.

“Prison systems rarely exercise much in the way of supervision over these companies,” Wright said. “Taxpayers are paying tens of millions of dollars for these services. Lawsuits are a great gauge of how well they are carrying out their duties.

“When you look at these lawsuits, you see cases of prisoners being killed by guards, beaten and raped by guards, killed by other prisoners, and dying of abuse and neglect,” Wright said.

“If we asked for this information from New Mexico Corrections Department or jails, they are legally obligated to give it to us,” he said. “But we’ve got these private companies refusing to give us information that if it were held by a public company they would have to give it to us.”

Wright said the Corrections Department is “complicit in concealing this information” because it doesn’t require the contractors to comply with IPRA.

In Florida, where the Human Rights Defense Center is based, the Department of Corrections includes provisions in contracts with private prison operators that require the companies to acknowledge they are subject to open-records laws, Wright said.

“In New Mexico, they aren’t taking that position,” he said. “No one in the Department of Corrections wants the public to know how bad these private prison companies are doing. And if they have nothing to hide, then why are they trying to keep these things under wraps?”

New Mexico Corrections Department spokesman Eric Harrison said in an email Thursday: “It does not appear we have been served as of today. Regardless, we cannot comment on active litigation.”

GEO Group did not respond to an email requesting comment on the center’s claims.

A spokesman for MTC — which manages a prison facility and an immigration processing center in Southern New Mexico, both of which have been overrun with novel coronavirus cases — said in an email: “MTC appropriately responded to the request it received from Human Rights Defense Center and will vigorously defend the lawsuit.”

Prying public records from private prison contractors has been an ongoing battle in New Mexico.

The Santa Fe New Mexican, the Albuquerque Journal and the Foundation for Open Government jointly sued Corizon Health in 2015 after the company, which formerly held a $37.5 million-per-year contract to provide medical care to state inmates, refused to release its settlement agreements in response to a request from The New Mexican.

State District Judge Raymond Ortiz ruled in 2016 the records were public and must be released. The New Mexico Court of Appeals affirmed his ruling in September. And the state Supreme Court declined to review the ruling late last year, resulting in some of the records being released.

But private prison management and medical care providers have continued to respond to records requests by saying they aren’t subject to IPRA.

Gov. Michelle Lujan Grisham and Corrections Secretary Alisha Tafoya Lucero both have said they support transparency when it comes to settlements.

But the Corrections Department awarded a new inmate medical care contract — worth about $246 million over the next four years — to Wexford Health Sources in 2019 that maintained the status quo.

Asked at the time why the Corrections Department did not include a provision in Wexford’s contract regarding transparency, Harrison said the medical care vendors they’ve dealt with have not been amenable to such a provision.

Lujan Grisham’s office did not respond Thursday to an email asking why the state does not require contract recipients to comply with IPRA. 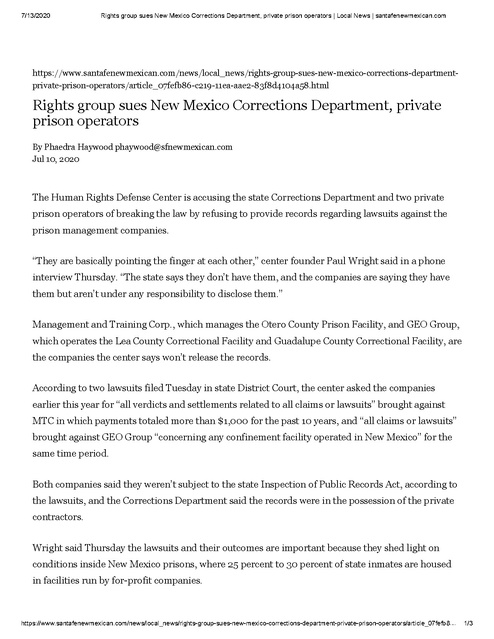