“Of course the other issue is the conditions of confinement; the way people are treated behind bars. Medical neglect is the big one, but now we just get into the whole laundry list of everything wrong—we’re seeing this with COVID for example: the conditions that prisoners are held in, how they’re treated, the lack of transparency, the impunity for misconduct by people employed in the criminal justice system at every level. I think that one of those things is that when you think about it in 1980, the American prison system was probably around one fifth of what it is today, and that said, in 1980, it was filled with plenty of problems too. The difference is, here we are 40 years later, and the system has gotten 5 times bigger, but the problem’s have also remained the same... if anything, it's a lot more draconian.”

“Prisons are literally systems of total control and you’re subject to literally the whims of a bunch of people that aren’t especially educated, a little bit of sadism, a little bit of maliciousness [...] they pretty much have total impunity when they do it- it’s not like there’s a lot of control or oversight over them and that and the casual brutality is one of the things that I think really surprised me when I went to prison [...] As far as the people responsible for every aspect of my life, that they really didn’t care about me, they didn’t care if I lived or died, and they viewed everyone in their care and custody as literally pretty expendable. And that regardless of what happened to the people in their care and custody, as long as no one escaped on their watch, no one was losing their job and no one was having any negative impact—didn’t matter who got raped, who got killed, who got mutilated, who died of medical neglect, their jobs are secure—the only thing thats gonna be a problem for them is if someone escaped.”

“In some respects I think that one of the things that's happening, making more and more people aware of the scourge of police brutality and abuse is frankly the ubiquity of cell phones and video recorders and social media, so that a) people are able to record the brutality and the killings and b) they’re able to disseminate it without going through legacy media, outlets that act as gatekeepers and controllers of this information. I think that’s what’s leading to the current situation, and again, whether or not anything will come of it or whether or not we go back to business as normal, I don’t know but at the end of the day, I mean the credibility that police states have depends a certain level upon the citizenry accepting those police states, and for now, it’s looks like people are starting to question that police state so we will see what happens.” 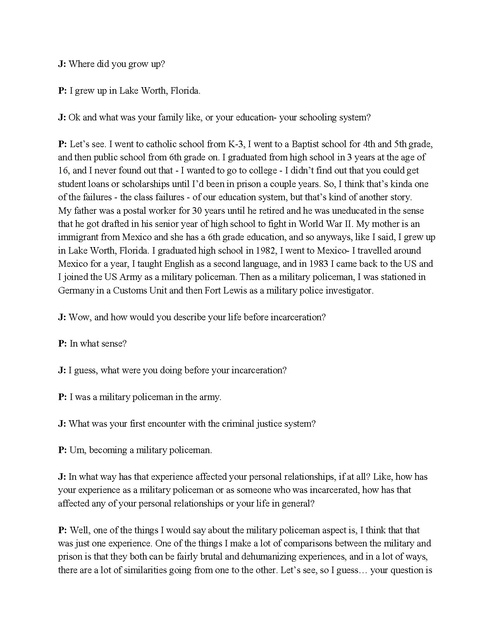