Law Enforcement Watchdog Group Sues LA County for Refusing to Disclose Records of a Half-Billion Dollars in Settlements of 1,000 Misconduct Claims and Lawsuits against Sheriff’s Department and District Attorney’s Office

Law Enforcement Watchdog Group Sues LA County for Refusing to Disclose Records of a Half-Billion Dollars in Settlements of 1,000 Misconduct Claims and Lawsuits against Sheriff’s Department and District Attorney’s Office

Los Angeles, California -- A law enforcement watchdog group sued the County of Los Angeles today for refusing to disclose records of 1,000 misconduct claims and lawsuits against the Sheriff’s Department and District Attorney’s Office that were settled by the county for more than a half-billion dollars. The Human Rights Defense Center, a non-profit law enforcement and prison watchdog group that publishes Prison Legal News and Criminal Legal News, alleges in its lawsuit that the County’s refusal to release the records violates the California Public Records Act.

“The public has a right to know the details of these claims and lawsuits, and settlements, which cost taxpayers more than $550 million in attorney fees and settlement costs from 2012 to 2020,” said Paul Wright, executive director of the HRDC. “At a time when the public overwhelmingly supports police reform, the County cannot chose to keep the problems with its Sheriff’s Department and District Attorney’s Office under a veil of secrecy,” Wright said.

“The County is hiding records that are required to be released under the California Public Records Act — pre-litigation claims, lawsuits, settlement agreements, and court judgments in cases against the Sheriff’s Department and District Attorney’s Office,” the HRDC said in its lawsuit filed in Los Angeles County Superior Court.

The requested records contain details about “wrongful deaths, excessive force, sexual assaults, and other misconduct” by sheriff’s deputies and prosecutorial misconduct by prosecutors, the lawsuit says.

“It’s crazy, but the County claims that it is in the public interest to keep these documents secret because it’s just too hard for the County to search for the documents,” said UC Irvine Law School Adjunct Clinical Law Professor Susan E. Seager, who is representing the HRDC in the litigation. “But the law doesn’t allow the County to just throw up its hands and say it’s too hard without even trying to search.”

“We call on the five supervisors – Chair Hilda Solis and Supervisors Holly Mitchell, Sheila Kuehl, Janice Hahn, and Kathryn Barger – to order the disclosure of these records right now,” Seager said. “The supervisors have the legal power to end this lawsuit if they choose openness over giving the gift of secrecy to the Sheriff’s Department and District Attorney’s Office.”

The HRDC lawsuit says that the “public interest in these records is extremely high.” The documents provide details about the more than a half-billion dollars -- nearly $550 million – in taxpayer dollars that the county paid to hire lawyers and pay settlements and court judgments to resolve pre-litigation claims and lawsuits for serious misconduct by the Sheriff’s Department, according to the County Counsel’s public Annual Litigation Cost Reports for 2012-2013 to 2019-2020. The HRDC is asking for the records for fiscal years 2010-2011 to 2018-2019.

The lawsuit alleges that “the County refused to make a reasonable effort to search for pre-litigation claims, lawsuits, settlement agreements, and court judgments, saying the request for ‘voluminous’ records for 850 to 1,000 settled lawsuits was ‘overly broad and burdensome’ and the ‘public interest’ in keeping the records secret ‘far outweighed the public interest’ in making the records public.”

“At the same time the County claimed it was too “burdensome” in 2018 and 2020 to search for the requested claims, lawsuits, settlement agreements, and court judgments, the County was able to provide the HDRC with three spreadsheets listing the case names, case numbers, and payment amounts for settlement agreements and court judgments for the approximately 1,000 pre-litigation claims and lawsuits settled against the Sheriff’s Department and District Attorney’s Office between January 1, 2010 and June 30, 2019,” the lawsuit says.

The HRDC is happy to provide these three County spreadsheets to the public. These three spreadsheets are attached to the lawsuit as Exhibits D, I, and J. The spreadsheet in Exhibit I contains all the settlements for cases involving deputies who are members of deputy gangs.

The County also provides case numbers, facts of the cases, names of the victims (but not of the deputies), and settlement and court judgment payments for what the County calls the “costliest” cases against the Sheriff’s Department in the County’s most recent Annual Litigation Cost Reports, which are posted online for the public here: Report

“The County’s repeated refusal to make a reasonable search for these records blocks the HRDC and the public from monitoring the Sheriff’s Department, the District Attorney’s Office, the County Board of Supervisors, and other County agencies that approved these settlements,” the lawsuit says. “The records provide important details about the shootings, car crashes, sexual assaults, beatings, prosecutorial misconduct, and other serious misconduct by these two agencies.”

“These records are of utmost public interest, especially when the public needs more information as it considers police reform,” the lawsuit says.

Since 1990 the Human Rights Defense Center has advocated for progressive criminal justice reform and the rights of prisoners, detainees and their families. For more information see www.humanrightsdefensecenter.org.

A survey conducted by Vox/Data for Progress survey between April 2 and 5, 2021 of 1,209 likely voters found that a large majority of voters support passage of the police reforms now stalled in Congress. Police Reform - Derek Chauvin 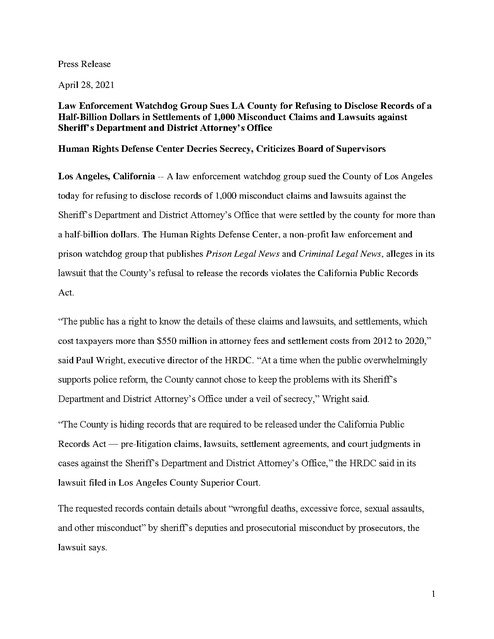