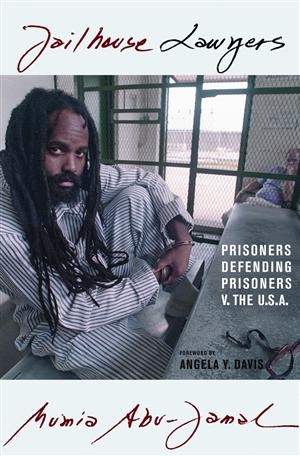 
In Jailhouse Lawyers, Prison Legal News columnist, award-winning journalist and death-row prisoner Mumia Abu-Jamal presents the stories and reflections of fellow prisoners-turned-advocates who have learned to use the court system to represent other prisoners—many uneducated or illiterate—and in some cases, to win their freedom.

In Mumia's words, "This is the story of law learned, not in the ivory towers of multi-billion-dollar endowed universities [but] in the bowels of the slave-ship, in the hidden, dank dungeons of America … It is law learned in a stew of bitterness, under the constant threat of violence, in places where millions of people live, but millions of others wish to ignore or forget. It is law written with stubs of pencils, or with four-inch-long rubberized flex-pens, with grit, glimmerings of brilliance, and with clear knowledge that retaliation is right outside the cell door. It is a different perspective on the law, written from the bottom, with a faint hope that a right may be wronged, an injustice redressed. It is Hard Law."

Mumia Abu-Jamal is author of many books, including Live From Death Row, Death Blossoms, All Things Censored, and We Want Freedom. He has been living on death row in a Pennsylvania prison since 1982.

"Jailhouse Lawyers is a must-read for everyone connected in any fashion to the criminal justice system. It illuminates a dark area seen by few and outlines the legal battles still waged from the "hole" by the semantic warriors who inhabit it. The book plumbs the depth of man's inhumanity to man by exploring the ongoing legal attack by underground lawyers on an unfair legal system. Death-row prisoner Mumia Abu-Jamal, an award winning journalist, once again demonstrates his courage in opposing the oppression of prison existence."
—Tony Serra

"[Mumia Abu-Jamal] is one of the most important public intellectuals of our time…. Jailhouse Lawyers is a persuasive refutation of the ideological underpinnings of the Prison Litigation Reform Act (PLRA). The way he situates the PLRA historically—as an inheritance of the Black Codes, which were themselves descended from the slave codes—allows us to recognize the extent to which historical memories of slavery and racism are inscribed in the very structures of the prison system and have helped to produce the prison-industrial-complex. Mumia Abu-Jamal has once more enlightened us, he has once more offered us new ways of thinking about law, democracy, and power. He allows us to reflect upon the fact that transformational possibilities often emerge where we least expect them."

—Angela Y. Davis, from the foreword