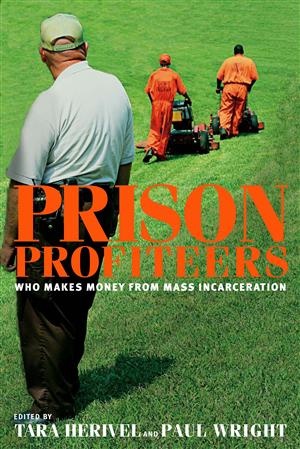 This is the third and latest book in a series of Prison Legal News anthologies that examines the reality of mass imprisonment in America. [The other two titles are The Celling of America: An Inside Look at the US Prison Industry and Prison Nation: The Warehousing of America's Poor, both available from PLN].

Prison Profiteers is unique from other books on the market because it exposes and discusses who profits and benefits from mass imprisonment, rather than who is harmed by it and how. Why is sentencing reform dead on arrival in every state legislature and congress? What is the biggest transfer of public wealth into private hands in recent history? Read Prison Profiteers and you will know! Hint: It has to do with prisons.

Positive: With the baby boomlet demographics, we foresee increasing demand for juvenile [incarceration] services. Negative: . . . it is often difficult to maintain the occupancy rates required for profitability.
—FROM A REPORT PRODUCED FOR THE PRIVATE PRISON INDUSTRY BY INVESTMENT ANALYSTS FIRST ANALYSIS SECURITIES CORPORATION

Locking up 2.3 million people isn’t cheap. Each year federal, state, and local governments spend over $185 billion annually in tax dollars to ensure that one out of every 137 Americans is imprisoned. Prison Profiteers looks at the private prison companies, investment banks, churches, guard unions, medical corporations, and other industries and individuals that benefit from this country’s experiment with mass imprisonment. It lets us follow the money from public to private hands and exposes how monies formerly designated for the public good are diverted to prisons and their maintenance. Find out where your tax dollars are going as you help to bankroll the biggest prison machine the world has ever seen.

Contributors include: Judy Greene on private prison giants Geo (formerly Wackenhut) and CCA; Anne-Marie Cusac on who sells electronic weapons to prison guards; Wil S. Hylton on the largest prison health care provider; Ian Urbina on how prison labor supports the military; Kirsten Levingston on the privatization of public defense; Jennifer Gonnerman on the costs to neighborhoods from which prisoners are removed; Kevin Pranis on the banks and brokerage houses that finance prison building; and Silja Talvi on the American Correctional Association as a tax-funded lobbyist for professional prison bureaucracies; Tara Herivel on juvenile prisons; Gary Hunter and Peter Wagner on the census and counting prisoners; David Reutter on Florida's prison industries; Alex Friedmann on the private prisoner transportation industry; Paul Von Zielbauer on the sordid history of Prison Health Services in New York; Steven Jackson on the prison telephone industry; Samantha Shapiro on religious groups being paid to run prisons and Clayton Mosher, Gregory Hooks and Peter Wood on the myth and reality of building rural prisons.

This is an exclusive paperback printing made just for Prison Legal News.