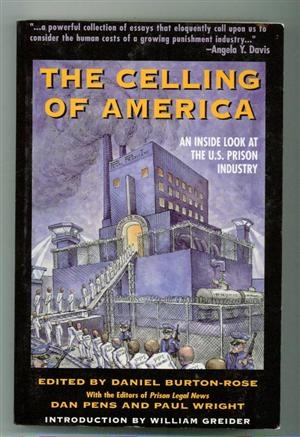 The Celling of America: An Inside Look at the U.S. Prison Industry


The Celling of America presents a detailed inside look at the workings of the American law enforcement system. The book examines the death penalty, control units, the politics of prisoner bashing, the role of the media in the current anti-prisoner climate, prisoner struggles, prison slave labor, racism, brutality and corruption among prison employees, the role of the gun lobby and the guard unions in formulating law enforcement policy, the downward spiral of prison conditions, private prisons and much, much more.

In The Celling of America, inmates in American penitentiaries report on their living conditions and political concerns. They paint a bleak picture of the prison system, describing police brutality, substandard medical care, racism, and extremely crowded conditions. They discuss privately-run prisons, prison labor, weightlifting, and the effect of television on prisoner's lives. Many of them believe conditions are getting worse every year, and their claims are quite credible because no one knows jail like a convict. Most of these articles originally appeared in Prison Legal News, a magazine published by Dan Pens and Paul Wright, two incarcerated men in Washington state.

The authors explain that reporters often rely on prison officials as the primary source for information on these issues, which leads them to present a biased view of prison life. State prisons limit and sometimes block prisoners' access to media, making it difficult, if not impossible, for prisoners to tell their side of the story. Inmates are easy targets for politicians because they aren't allowed to vote and can't talk back.

These essays compel readers to reevaluate their ideas about the average prison inmate, to think more carefully about that man lounging in his cell watching television. It was interesting to learn that while some states provide each prisoner with a television on the theory that television pacifies people, other prison systems forbid televisions because some believe watching television is a luxury that inmates don't deserve. The book would have been better if it had told more about the people who wrote the essays. I kept wondering what each writer did to end up in the slammer, and that information seems significant. Do you trust a thief to tell you about multinational corporations profiting from cheap prison labor? Do you trust a sex offender? Who do you believe? That is one of the central questions posed by this collection. --Jill Marquis